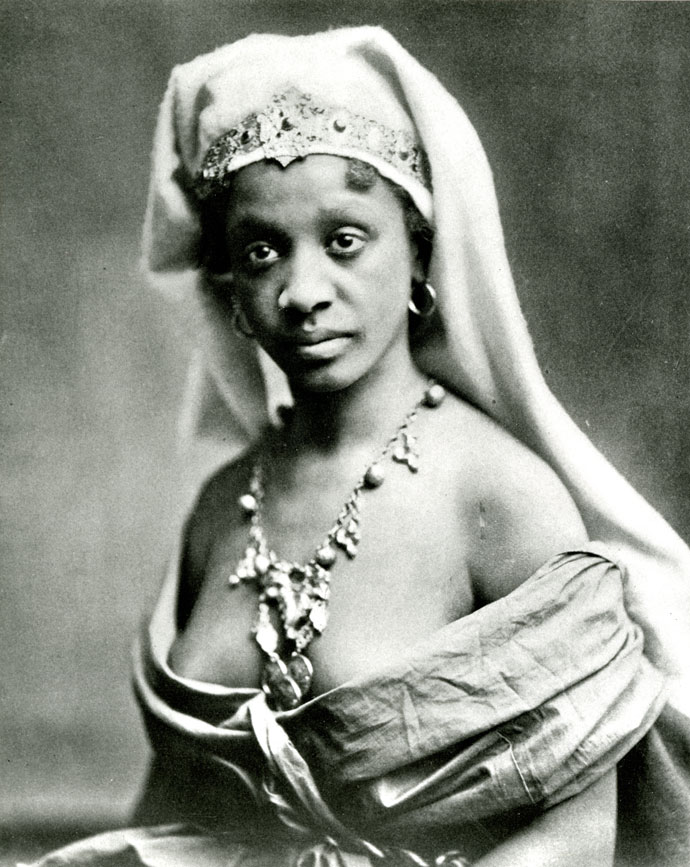 The most magnificent drama in the last thousand years of human history is the transportation of ten million human beings out of the dark beauty of their mother continent into the new-found El Dorado of the West.  They descended into Hell; and in the third century they arose from the dead, in the finest effort to achieve democracy for the working millions which this world had ever seen.  It was a tragedy that beggared the Greek; it was an upheaval of humanity like the Reformation and the French Revolution.”

“Posing Beauty in African American Culture,” a photographic history of black beauty, starts with the 1890s, after the period Du Bois describes. But it speaks to the same issues of ascendance from the unconscionable depths of slavery–how black people, a nation within a nation, assert themselves in American culture and make a way forward. How we insist upon our own subjectivity–in this case, literally, while posing for photographs. How we stake claim to our beauty–and our humanity.

To be seen as beautiful is to possess a certain power. To be seen at all is a triumph for a people who’ve survived a centuries-long assault on their freedom, character and culture. NYU professor Deborah Willis, who curated the exhibition and a book of the same name, makes a powerful contribution to art and to history by tracing the rise to freedom in the faces of so many black men and women, known and unknown, bygone and current.

Collectively, the images powerfully display a multifaceted black America that’s all too often rendered invisible or seen as a monolith. “Posing Beauty” presents shades of time and place, circumstance and culture, color and class that distinguish black people. It offers a fascinating look at individual faces, gazes and postures that together point to the profuse diversity and resilience of the black community.

The traveling exhibition, now on display at the Virginia Museum of Fine Arts, considers black beauty without venturing to define it. It poses important questions about aesthetics so diverse and dynamic that they defy boundaries. What is beauty? Who possesses it? What characterizes it? Why does it matter?

Behind the camera, photographers–black and white–frame their subjects for us in provocative, compelling and sometimes troubling ways.  Edward S. Curtis, a white American photographer, gives us A Desert Queen, 1898.  In the posed studio portrait, a black woman sits loosely draped in fabric and jewelry, her breasts nearly bared.  Why?  What was the photographer’s intent? And, more importantly, what was the model’s?

White documentarian Russell Lee’s Street Photographer, New York, 1935-1936 shows a black portrait photographer taking a picture of a young boy.  By framing the photographer and the boy, Lee reminds us of the collaboration between the artist and his subject and alludes to himself as an interloper, operating from the margins.  Did the portrait photographer know Lee was watching?  What does it mean that Lee’s image is featured in this exhibition, not the portrait itself?

Ken Ramsay and Anthony Barboza give us Black Beauty and Black Power merged to dramatic effect. Ramsay’s portrait of a bald Susan Taylor, with elegant bearing and giant hoop earrings, is breathtaking.

What was going on within black people and within American culture that brought out certain styles of clothing, hair and bearing? How are issues of aesthetics and ideology tangled up in visual representations?

I have no definitive answers, but I’ve enjoyed pondering a myriad of questions provoked by this compelling collection. And seeing this celebration of black beauty in Richmond, the former capital of the Confederacy, is particularly meaningful.  It’s a vision to see the Posing Beauty banner stretching across the museum’s facade next door to the United Daughters of the Confederacy building. The contrast is emblematic of the unique space in which these important discussions of black pride, agency and beauty are taking place.

We’ve come a long way as a people and as a nation, but still have a ways to go. I like to think that exhibitions like these prompt us to see the world and ourselves in an expansive, positively transformative light.

See “Posing Beauty” for yourself on Saturday, June 21 during VMFA’s Celebration of African and African-American Art.  Complimentary admission to the exhibition is being offered from 1 p.m. to 4 p.m. that afternoon thanks to a sponsorship from the Richmond (VA) Chapter, The Links, Incorporated.  That’s us posing beautifully at VMFA in the photo below.